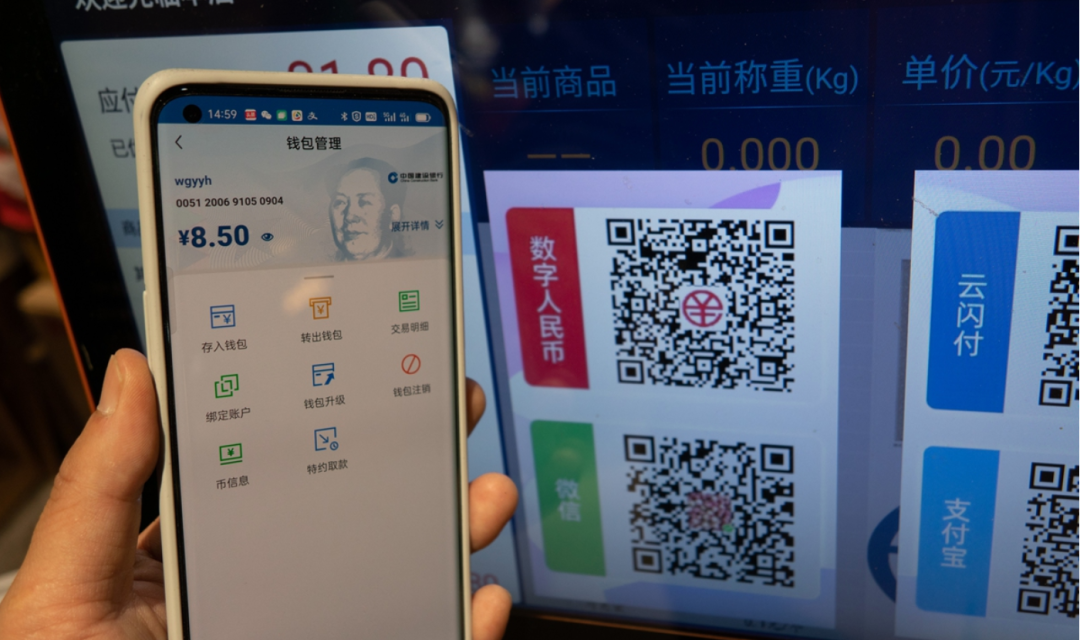 China's central bank announced Saturday that its digital yuan pilot program will be expanded to more domestic cities following its successful operation over the past years.

The sign of China's digital yuan, or e-CNY at the 2021 China International Fair for Trade in Services in Beijing, China September 3, 2021.The orderly expansion of digital renminbi trials in China is expected to advance its research and development and wide-range applications, experts said on Monday, as the nation works to build a robust ecosystem for its digital currency, or e-CNY which will be accessible in Tianjin, Chongqing, and Guangzhou in South China's Guangdong province, Fuzhou and Xiamen in east China's Fujian Province, and six cities in east China's Zhejiang Province hosting the 2022 Asian Games, the People's Bank of China (PBOC) said in a statement.

A staff member of the Bank of Communications Beijing Branch instructs a visitor to open a digital RMB wallet on a mobile phone, on June 16, 2021.Analysts have said that the expansion of piloting will help test e-CNY's functioning and security more thoroughly and at a greater scope. With more regions joining in the piloting program, the digital yuan will become increasingly accessible in daily life.

A Shanghai resident uses digital yuan to buy fruit at a market.The digital yuan is likely to have more application scenarios in sectors such as travel, tourism and payment of administrative fees, e-commerce, and retailing, while gradually increasing its presence in industrial supply chain financing, enterprise-level trade, and some other real economy sectors. The current tests primarily focus on the digital renminbi's functioning in consumer payments and have been making steady progress, Although in the near future its use will be expected to apply beyond retail payment scenarios as more tests continue to be conducted in China's banking system.After a large number of tests at the central bank and commercial banks, a complete issuance and circulation cycle of digital renminbi is expected to be done for it to enter wide use.

Event staff helping visitors inquiring about the digital yuan during the winter Olympics.The country has already tested the use of the digital yuan in over 10 places from Shenzhen to Shanghai and Xiong'an New Area. Most recently, Beijing and Zhangjiakou were included into the program after tests in the 2022 Olympic and Paralympic Winter Games, Hainan was the only provincial-level trial region. Inside the “Olympic bubble ”— at the Olympic villlage; athletes, media, employees, and all different friends had three payment options accessible-Visa, money, and China’s digital currency, the e-CNY. Visa had a monopoly on payments at the Olympics for 36 years and China put an end to that.

Residents who received "red packets" of digital RMB use the money in a store in Shenzhen, Guangdong Province, on October 14, 2020.A report from PBOC indicated that by the end of 2021, 261 million digital yuan wallets had been opened by individuals and the transactions amounted to nearly 87.57 billion yuan ($13.76 billion).